We give our pets credit for a lot of things, but memory tends to be a touchy topic. It’s widely believed that animals simply don’t possess the same power of remembrance that humans do. Sure, you can train them to come when they’re called and use the litter box, but do cats really remember things?

Memory is still relatively unexplained by science. Even human memory remains largely mysterious. We know about different types of memory and the parts of the brain they’re associated with, but we don’t know how memories are encoded or how we’re able to retrieve specific ones from the vast libraries of our brains.

Cat memory is even less understood than human memory, but it appears to work similarly to ours. We can combine what we do know about the feline brain with concepts from human neuroscience to explain the whats, whys and hows of cat memory. Let’s explore this fascinating field and discover some surprising truths about cat cognition.

The Two Stages of Memory

Scientists have defined two stages of memory that are present to various extents in both humans and non-human animals. Information is stored in these memories for different durations and purposes depending on the type and importance of the input. Understanding these stages is key to comprehending cat memory.

Newly acquired information is stored in the short-term memory. This repository for incoming observations is instantly accessible, but it can’t hold very much.

Think of short-term memory as a blackboard in a classroom: information is written down as it becomes available. Significant facts or equations are transcribed by students into their notes; some very basic information such as the date and the teacher’s name may remain in the corner from class to class. But the blackboard only has so much space, and the immediate relevance of what’s written on it fades as the lesson progresses, so it’s regularly erased.

Because there’s not a lot of room in the short-term memory, it’s used only for information that has immediate significance and tends to be quite general in nature. Think about where you are right now; you probably remember what room you’re in but you probably don’t remember the exact position of every item within it, even though you’ve perceived it all. Only the most important information remains in your short-term memory because usually that’s all you need to recall at any given moment.

We still don’t know how cats process or separate information, so the capacity of a cat’s short-term memory is unknown, but humans can retain around seven words or digits in our short-term memories. This number varies widely between individuals and can be increased with practice, so it stands to reason that some cats also have larger short-term memories than others.

What we do know is that cats have us – and lots of other animals – beat in the duration department. Humans retain information in our short-term memories for around 18 seconds if we don’t make an effort to remember them for longer spans. Dogs’ short-term memories last around five minutes.

Cats, on the other hand, can hold information in their short-term memories for a staggering 16 hours – but they only retain it for that long if it’s to their benefit. If the memory is no longer relevant (for example, the location of a treat that has since been eaten) it is not retained. The duration is also highly impacted by the means through which the information was acquired; memories related to a cat’s movement or position persist far longer than ones obtained purely through sight, which last just a few minutes before being forgotten.

Long-term memory is further divided into two subcategories: implicit (procedural) and explicit (declarative) memory. These memories are stored in different parts of the brain and are recalled and utilized in very different ways.

Explicit memory refers to information that can be consciously recalled, such as facts, events and experiences. Remembering someone’s name, “replaying” an incident in your head and identifying objects are all acts that involve explicit memory. For a cat, explicit memories may include the location of its home, the faces of its owners and all the times it went to the vet.

Implicit memory handles movements and other “unconscious” functions and procedures, hence its alternative name of procedural memory. Examples of humans’ implicit memories include writing, driving, tying shoelaces and eating; these actions still require conscious thought to customize them to each individual circumstance, but the motions that comprise them are recalled automatically. Cats have their own set of procedures that draw from implicit memory, including grooming themselves and stalking prey.

Both types of long-term memory are utilized in emotional regulation. Explicit memory encodes the circumstances and events associated with an emotion, but deeply-felt emotions often provoke a deeper, uncontrollable response; this difficult-to-describe sensation originates in the implicit memory. Though we can’t say for sure how cats feel and process emotions (and thus how much they involve each type of memory) they do appear to experience them.

Long-term memory is generally indefinite in duration. Though the ability to successfully create and recall long-term memories degrades with age and poor health, humans and cats alike are able to recall people, places and events from their youth even in old age. Cats have been proven to recall memories from up to 10 years prior, although anecdotal evidence suggests that their long-term memories can last much longer.

Although the process of encoding long-term memories is still unknown, sleep appears to play a massive role. Inadequate sleep has drastic detrimental effects on the accuracy, detail and amount of memories formed. It also impacts the ability to recall memories.

Perhaps this is part of why cats have such a strong ability to recall things. The 16 or more hours of sleep they get each day must give their brains plenty of time to encode information and file it away in the depths of their long-term memories.

The method by which information is acquired dictates how readily and accurately it’s stored in the memory. Two of these have been studied in cats: spatial memory and visual memory.

Spatial memory refers to the memory of positioning and moving the body in relation to other physical entities and the environment. It is perhaps the strongest type of memory a cat can form; it persists for a long time in the short-term memory and appears to enter the long-term memory very quickly. This makes sense when you think about how agile and athletic cats can be – they’re hardwired to be skillful movers. 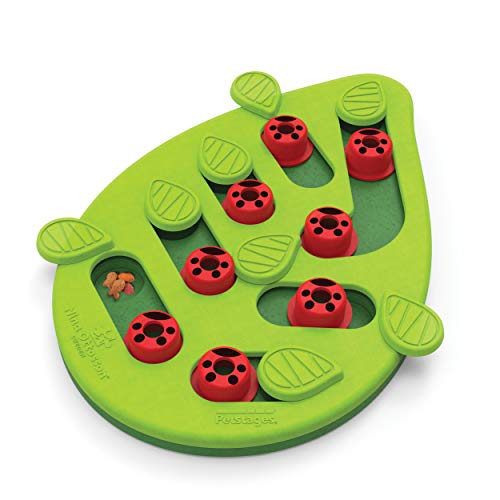 Cats are able to rapidly learn and readily recall very precise motions, such as the exact starting point and force needed to jump up onto various furniture. They will follow the same paths to their favorite spots, sometimes down to the footstep! All of this is possible because of how well they retain spatial memories.

Spatial memory also comes into play when recalling where things are. If a cat finds food, it can store the precise location in its short-term memory for over 15 hours. This highly advanced spatial memory is vital for feral cats and the big cats of the wild, who might happen upon food sources during their travels and need to return to them from miles away on subsequent days.

Although their eyesight is quite good, cats are much less adept at retaining visual memories than they are at retaining spatial ones. It can take them a while to learn what new people look like and they have trouble recalling the locations (and existence) of things they’ve seen but not interacted with.

In one study, cats were placed in front of a hurdle and trained to jump over it. They were stopped when their front legs had cleared the hurdle but their back legs had not yet been brought over. They were then distracted for 10 minutes and the hurdle was removed.

After 10 minutes passed, the cats were allowed to continue with their movement. They still brought their back legs up at the height needed to originally clear the hurdle, indicating that they were able to store the remainder of the movement in their short-term memories for at least 10 minutes.

In contrast, some cats were stopped just before they reached the hurdle but had not yet begun to jump over it. The cats were distracted, the hurdle was removed and then the cats were allowed to move forward. When they did, they did not jump or even raise their steps; they had forgotten about the hurdle after not seeing it for just a few seconds.

The results of the study indicated that cats don’t retain a lot of information about the things they see, but their ability to remember movements and the positioning of their bodies relative to the environment is exceptional.

Certain things seem to stick around in cat memories more frequently and with greater ease than others. Here are some of your cat’s strongest memories – and why they’re so powerful.

Every so often a story pops up about a cat who reunites with its old owner after being separated for years. The cat can tell right away who the person is, even though appearances have changed, and it behaves as if they’d never been apart. Not only are cats able to recognize the people they’re closest to, they retain those memories for life, never forgetting the kindness and love that was shown to them.

It’s often claimed that a kitten’s ability to trust humans is determined in the first two to seven weeks of its life. If no positive human interaction is experienced within that time, the cat will be automatically distrustful of people throughout the rest of its life. There are certainly exceptions to this, but for the most part it does appear that positive memories of humans from kittenhood are crucial to the cat’s ability to bond with them in the future.

Cats also remember those who have wronged them, and those memories impact their future interactions with people to an incredible degree. An abused or neglected cat will never forget who hurt it, avoiding that person and anyone similar in appearance for the rest of its life. If harmed by a man, the cat may display fear or aggression towards all men it encounters; this behavior can also apply to places and even objects (the cat carrier is a common example.)

All things food related seem to take priority in a cat’s mind. From the location of its food bowl to the sound of the can opener to the time of day it gets served, the cat remembers anything and everything to do with its meals.

This memory extends to the ways the cat acquires food as well. All it takes for your cat to learn how to get an extra snack is one instance of you giving in to its pleading meows. After that, it will remember exactly how that day went down: “If I sit here at this time and meow just like this, my bowl gets filled!”

Your cat can remember things from long before it was even born – lessons from the past, passed down through ancestral memories, or instincts. A cat that’s been inside its entire life and has never seen a bird will still enter hunting mode when it sees one for the first time; that’s ancestral memory at work.

The felines, both domestic and wild, that preceded your cat survived in large part thanks to these inherited memories. We can’t say for sure whether the cat perceives them as memories, urges or something else entirely, but we can be sure that they’ve helped shape it into the unique animal that it’s become over thousands of years and generations.

2 thoughts on “The Forgetful Feline: How Long Is a Cat’s Memory?”