When your cat rolls onto its back and looks up at you with its big eyes, it can be hard to handle the cuteness. With its belly on display and its upside down stare, your cat is rarely more adorable than it is when it’s lying on its back. It’s a position that seems designed just to make you go, “Aww!”

After snapping a quick photo, you reach down to give your cat a belly rub… and you’re met with claws and teeth sinking into your hand. The cuteness from just a second ago is gone; now you’re seeing some of the wild origins of your domestic cat. What was the point of that?

A Display of Trust

The stomach is one of the most vulnerable parts of a cat’s body. In times of danger, a cat will prioritize defense of its head and stomach before everything else. With many vital internal organs lying just beyond the cat’s fuzzy belly, the risk of serious injury there is much greater than it is elsewhere.

If your cat is lying on its back with its belly exposed, it may be a sign of submission and trust. A cat displaying vulnerability on its back will also spread its legs open, relax its tail and look up at you with a calm expression. It may purr softly, and if you move your hand towards it, it won’t appear jumpy or begin to flick its tail.

During these displays of vulnerability, your cat feels safe enough around you to allow you access to its stomach, so it may be open to receiving a belly rub. Try to gauge your cat’s temperament as you approach it; if it remains calm, it’s a good sign that you’re invited to pet it. Be gentle and cautious – you don’t want to betray the trust you’re being shown.

Sometimes a cat lays on its back for slightly more sinister reasons. A sudden flop down onto the floor could signal that your feline is feeling a bit feisty, so make sure to read the rest of its body language before getting any closer.

Watch your cat’s tail for a reliable indicator of mood. A tail that flicks back and forth rapidly indicates a heightened state of activity – a good signal that it’s playtime, not petting time. Some cats may even bring their tail in between their legs and onto their stomachs to bite and paw at, like a built-in toy.

A cat’s eyes can reveal a lot about its mood – glowing eyes that follow your movements intensely indicate that you’re being targeted. The cat’s paws may twitch and you might notice it take a few practice swings in your direction. You might hear purring or a series of quick meows: a siren song intended to lure you into the cat’s range.

If your cat is on its back for playtime, it’s wise to avoid putting your hands near it. Though the temptation to try for a belly rub is strong, save it for another time.

Instead, bring out the toys. Wand-style toys and stuffed animals are good choices for this type of play. Just dangle the wand above the cat’s stomach or toss it a soft toy stuffed with catnip and watch the claws come out!

Every cat has its favorite sleeping position. For some this means curling up into a tight ball; for others, it’s more comfy to stretch out on their sides. Still others find that there’s nothing more relaxing than laying on their backs. 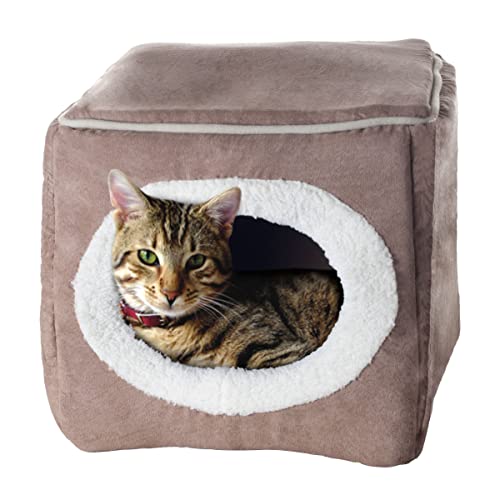 Sometimes cats start out sleeping on their sides and roll over onto their backs while they’re unconscious. Other times they start out belly-up and get so comfy that they drift off into dreamland. Either way, it’s definitely one of the cutest sleeping positions cats assume.

It’s usually pretty easy to tell when a cat on its back is just trying to rest. Its legs will be relaxed and its eyes will be closed. If it’s asleep, its breathing will be slow and you might even be able to hear some gentle snoring.

Waking a sleeping cat runs the risk of getting swatted at even in more protected positions. With its vulnerable stomach revealed, a cat is even more likely to react defensively if roused from its slumber. If your cat is sleeping on its back, it’s best to simply leave it be and wait until it’s awake to give it any attention.

In the Mood for Love

A female cat in heat may lay on her back to indicate that she is ready to mate, especially in the presence of male cats. It’s pretty easy to tell if this is the case, as cats in heat will show many other symptoms of their readiness to mate, such as intense loud vocalizations and a desire to escape the house. Spayed cats do not go into heat, so if your cat is spayed you can rest assured that she’s not on her back for mating purposes.

It’s best to avoid touching your cat’s stomach if she’s in heat. In this state, she’s highly sensitive and unpredictable; touching her belly could rile her up even more, causing her to scratch or bite you. Save the belly rubs for when she’s out of heat and calmed down.

Most of the time, cats won’t show their stomachs if they feel threatened. Occasionally, though, a cat will lay on its back as a defensive position, as if to trick others into approaching it. Whoever falls for this tactic will be clawed with all four paws and likely bitten as well.

If your cat lays down on its back immediately after an uncomfortable or aggravating incident, such as a sudden awakening or an encounter with a pushy dog, it’s probably not in the mood for a belly rub. Rather, it’s priming itself for an attack. Watch the tail for confirmation – if it’s flicking uncontrollably or fluffed up, the cat is definitely not happy.

You can also look for other signs of agitation such as pushed-back ears, dilated or glowing eyes and aggressive vocalizations such as growling or hissing. If any of these are present, it’s best to heed the warning signs. Back off for a while and let the cat calm down before approaching it again.

4 thoughts on “Compromising Positions: Why Do Cats Lay on Their Backs?”